A minicomic from the random stack of unread comics. 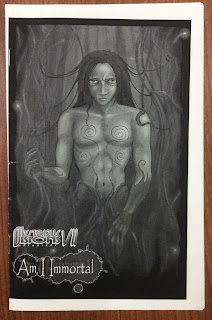 This is a preview minicomic/ashcan for the Am I Immortal story from Mysterious Visions Anthology #7, published by Dimestore Productions. This vampire tale has Cain, the main character, looking back on a pivotal loss in his life that has served to motivate his present actions.

Although this minicomic only delivers a snippet of the story, there is definitely enough of interest here to get me curious as to the full tale. The artwork has a nice look to it, although it suffers a bit from the limitations of the photocopied minicomic.

Email ThisBlogThis!Share to TwitterShare to FacebookShare to Pinterest
Labels: 2008, am i immortal, am i immortal to wake, dimestore productions, minicomic, shawnti therrein

From the random undread comics stack. This was published in 2001, but I have no idea where or when I got it. 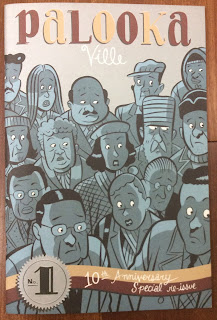 Reprinting the debut issue of Palookaville from 1991. Framed by the narrator reminiscing on his life in Toronto in the 1980s, the story in this issue centers on him becoming the victim of an anti-gay beating by a group of homophobic attackers on the Toronto subway system.

Introspective and disturbingly real, the story follows the aftermath of the beating and the responses of the narrator's friends as he seeks help. The supporting cast is quirky and it is their kindness that shines through the bad situation.

Interestingly, the editorial by Seth for the anniversary edition indicates that he doesn't think this story was very good work as he looks back on it. For me, it captured my attention, was loaded with great details, and featured and intriguing cast of characters.

Minicomic freebie from the unread comics stack. Not sure where I got this one. 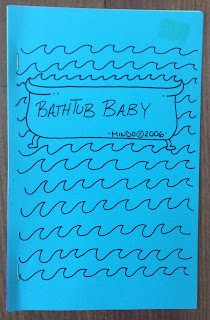 This is a straight-up story of the writer/artist's pregnancy, full of detail and touches of humor.

It was a good, thoughtful read without taking itself too seriously, and the relationship between the parents shines through nicely.

As happens a lot with minicomics, some of the lettering got reduced a bit too much for comfortable reading, but that's a pretty minor issue in what is otherwise a nicely grounded and true-to-life story.

Did I mention that we got a pretty big haul of comics on Free Comic Book Day back in 2008? I keep finding more in the unread comics stack! 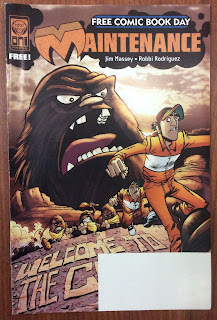 Doug and Manny are a couple of regular working guys who just happen to work in a research lab that specializes in science of the mad variety.

When a time machine malfunctions, they find themselves in prehistoric times, facing down a group of humanoids with a striking resemblance Hanna Barbera's Captain Caveman. Except that several of them are equipped with jetpacks.

The plot was certainly well-conceived. As for the dialogue... When it worked, it worked well. When it didn't, the jokes really fell flat for me. Humor is hard to do, and it's a matter of personal taste, but for me, this just wasn't all there as far as the actual laughs went.

From the random stack of unread comics and that massive FCBD haul we got in '08. 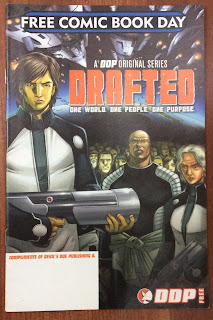 This Free Comic Book Day special was essentially a recap of DDP's Drafted series, issues 0-5. It's cobbled together from those five issues with a "voiceover" in caption form.

The story is about Earth's first encounter with an advanced alien civilization, who has arrived to draft the whole human population into war with another alien species, a race of sentient world-eating worms. The incentive for humanity is pretty straightforward: The World-Eaters have Earth as their next target.

This looked like a really interesting idea. The aliens are desperate in their own way, in spite of their advanced technology, and there are a lot of plot twists as humanity gears up for all-out war.

The execution of this sample book could have been better, however, as the narration got wordy, and all of the cuts in the story disrupted the flow of the narrative and failed to give much sense of the characters.

I was also left wondering why exactly these aliens need humans in their battle. Hopefully that is explained in the full series, but it still felt like something of a gaping hole in this glimpse of the story.

And finally, the villains left a lot to be desired. They felt generic, and not sufficiently threatening, especially compared to the abilities of the "good" aliens.

Diary of a Wimpy Kid

I bought this last fall at a bookstore here in Saigon as a Christmas gift for the Kiddo. 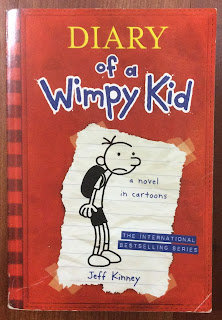 This is an interesting mix in terms of its format. Not exactly a prose novel, and not exactly a graphic novel, but something in between, with short cartoons with dialogue that serve as illustration and enhancement of the story.

The story itself felt pretty familiar. The main character is a lazy middle-schooler who is trying to navigate his way through the hallway politics of his school while getting by on doing as little actual work as possible on pretty much anything.

The problem for me was the lack of growth of the main character. The situations are funny, but Greg Heffley barely learns or changes over the course of a school year, with even the climactic regaining of a friendship feeling mostly like a return to the (abusive, when it comes right down to it) status quo.
I was also disappointed by the fallback to treating girls in that kind of "mysterious other species" vibe that you see in so many stories for young readers told from a boy's point of view. Everything about girls in this book (well, what little there is) is cliché and stereotype.

I did like the cartoons. They were effective, and added a bit of extra edge to the jokes. The situations that Greg Heffley finds himself in get more outrageous as the story progresses, and there were some genuinely funny moments. My son also enjoyed some of the catchphrases that come up.

There is a fun segment about Greg's attempt to become the official cartoonist of the school newspaper that strikes a nice nerdy note.

But in the end, there really aren't any likeable characters at the start of the book, and they really haven't gotten any more likeable by the end. Seeing them get various doses of comeuppance in between wasn't enough to keep me entertained.

A Free Comic Book Day item from the stack of random unread comics. 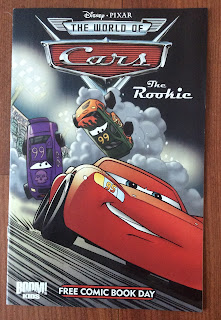 This Disney/Pixar tie-in follows the trend of many recent movie-related comics by functioning as a prequel, covering a time period not seen in the films. In this case, the focus is on Lightning McQueen's racing career before the events of the first Cars film. And in this case, it works pretty well.

Using an interview as a framing device, and with Lightning McQueen going full-on unreliable narrator, the reader hears the story of McQueen's qualifying races in McQueen's own words, while the artwork tells the actual story.

This was fun, and kept nicely to the flavor of the movies. McQueen's voice was spot-on as the boastful rookie racing sensation, and the action was amusing.

Writer Alan J. Porter's short editorial expounding on his love of motorsports and its influence on the comic was a nice touch.

Backup story featuring The Incredibles by Mark Waid and Michael Avon Oeming was a fun glimpse, but cut off before things really got interesting.

Posted by RickSilvaWriting at 12:24 AM No comments:

Graphic novel that the Kiddo picked out from a bargain bin at New England Comics in Quincy MA. 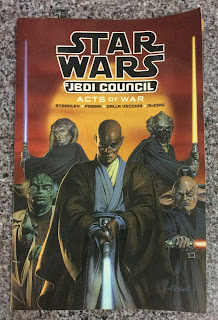 This trade paperback edition collects the four-issue comic series of the same title. Set before the events of The Phantom Menace, the story centers on the rise of a reptilian warrior species called the Yinchorri. These creatures are formidable foes for the Jedi, as they are immune to "Jedi mind tricks", and possess weapons capable of temporarily disabling a lightsaber.

Following the loss of a team of Jedi sent to deal with the Yinchorri under his orders, Mace Windu is determined to lead a larger force and locate the Yinchorri command base. His Jedi team includes an array of new characters, plus the familiar faces of Qui-Gon Jinn and Obi Wan Kenobi.

While the Jedi forces split into three groups and face heavy opposition at every turn, Yoda and the rest of the Jedi Council face danger back home, while Darth Siduous and Darth Maul plot behind the scenes.

In spite of occasionally having more of a Star Trek diplomatic feel, this serves as a reasonably interesting prequel to, well, the prequels. There is some good character interaction, and it's fun to see Mace Windu front and center in the thick of the action.

The battle scenes felt repetitive, however, and in spite of their gimmicks, the Yinchorri made for pretty generic and one-dimensional adversaries. They are relentless fighters, but show little strategy, and are threatening mostly just by the fact that they outnumber the Jedi in nearly every battle.

I enjoyed the new characters who were introduced, and there were a couple of good emotional scenes, but there were too many bland battle scenes and not enough really interesting plot developments to make this a really great story.