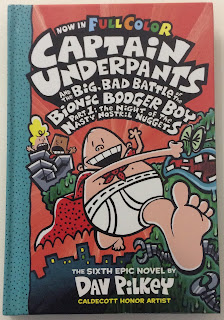 Gynn picked this up for the Kiddo when she was in the USA recently.

This is the full-color edition of the sixth book in Dav Pilkey's Captain Underpants series. Like the rest of the series, it's a mix of comics and prose (plus the occasional Flip-o-Rama!).

Class nerd Melvin Sneedly vows revenge after George and Harold subject him to a series of pranks, including writing him into one of their comics making fun of his tattletale tendencies. He attempts to use his Combine-o-Tron machine to make himself into an invincible cyborg, but an ill-timed sneeze results in a revolting combination of boy, robot, and boogers.

I can't say I'm a big fan of gross-out humor, which is the main theme of this installment, although here it is decidedly gross-out humor of the over-the-top silly variety.

As usual, Pilkey manages great timing, and scatters in a few really brilliant jokes, but this installment was a tad too sticky and slimy to be a favorite of mine. The Kiddo certainly enjoyed it. It ends on a cliffhanger (as the "Part 1" in the title implies), so the snot-related jokes are only just getting started.

I will also point out that the color really enhances the artwork for this story, providing some perfect booger-green for the action scenes.

Posted by RickSilvaWriting at 3:05 PM No comments: 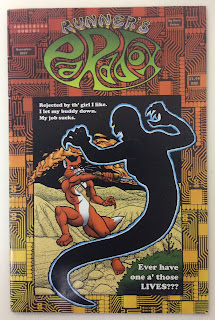 I was doing really well with having my daily comic review be well, nearly daily since January, but I've now gone about two weeks without a review as real life got somewhat in the way. Getting myself back on track here.

From the Random Stack of Unread Comics.

This comic is a companion piece to Steve Peters' musical album, Paradox, with each chapter of the comic corresponding to one of the songs, and the song lyrics appearing between the panels of the story. All of the contributors to this issue are members of Micropolis Embassy, a Micronauts toy collecting group, and there is some Micronauts-themed influence in some of the extra artwork that appears throughout the book.

Runner, a fox, is tasked with defending a lonely stretch of desert road from ghosts that menace passing truckers. A small sailback dinosaur named Caesar is his faithful companion, and he has occasional visits from a flirtatious fairy, an angelic muse, and the robot beings who assigned him to his lonely version of purgatory.

Much of his musing are spent on his unrequited love for Mel, one of the truck drivers who travels the nearby road.

He also meets the ghosts of Kurt Cobain and Marilyn Monroe, and is (briefly) beamed aboard a passing starship.

This story had a lot going on, and some of the bits felt like they could have been expanded on. All in all, though, it was full of surreal surprises, and a lot of introspection. Runner is an interesting character who genuinely tries to do good, deals with a  really difficult situation, and sometimes has to deal with the consequences of his own bad decisions.

The use of lyrics worked well, and symbolic elements have good interplay with the plot of the story.