Another comic I purchased last June at MASSive Comic Con in Worcester MA. 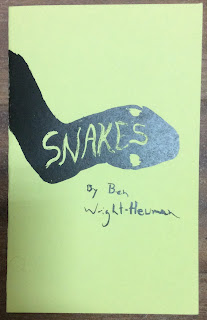 Where the previous minicomic I read by Benjamin Wright-Heuman (review here) had the feel of a fable, this is more like a folk legend told around a campfire. It's a short simple story of a woodsman isolated in the wilderness who kills a massive snake, and dines on a steady diet of snake meat over the long, cold winter.

The ending is fitting and satisfying, if not terribly original.

Good artwork that fit well with the story. The lettering was a bit challenging to make out in places.

From the comics I purchased over the summer. I got this one directly from creator Barry Corbett at MASSive Comic Con this past June in Worcester MA. 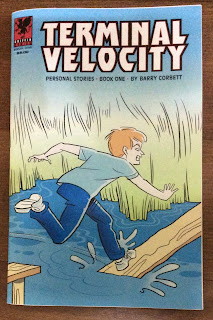 This is an autobiographical comic, in standard comic format, by Barry Corbett, telling stories from his childhood and young adulthood in New England during the 1970s and 1980s.

The stories are told with a good voice, some nice touches of humor, and an art style that works nicely with the storytelling. From clashes with bullies to adventures skydiving and scuba diving, there are some great moments of adventure, along with plenty of youthful foolishness and mayhem. There is family tragedy as well, and Corbett handles the serious stuff as deftly as he covers the lighter tales.

This was a really engaging collection and I have a feeling given what was presented here that the creator has plenty more stories to tell. Hopefully a second volume will be on the way soon.

Back to the random stack of unread comics. This is a fairly recent one that I got this past summer. 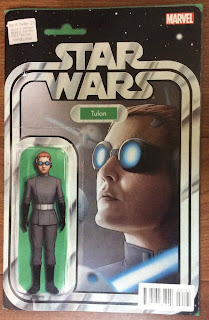 I am not ashamed to admit that the variant cover with the awesome action figure packaging design totally sold me on this comic. I love this cover theme! So much childhood nostalgia!

That being said, I knew nothing about the Darth Vader series going into this. Apparently it takes place between Episode IV and Episode V, and Vader is trying to get back into the good graces of Emperor Palpatine following the destruction of the Death Star. He is tasked with capturing Cylo, a mad scientist type who turned against the Empire (not to the rebel side, mind you, this guy appears to just be out for himself).

Meanwhile, there's a second plot involving Vader sending a pair of droids who are essentially heel versions of C3PO and R2D2 to retrieve a former ally of his who has gone into hiding.

The bad-guy droids are a little goofy, and it was odd to see Vader in a sort of solo-adventurer heroic role (although it's really no different than things he did all the time as Anakin).

There is also an issue of flavor that can be a problem for me with some Star Wars comics. Cylo's organic-mechanical ships didn't feel authentically Star Wars to me, for reasons I can't pin down to more than just "vibe". To be fair, I think that keeping the flavor of a tie-in when you're being asked to expand on the universe is really difficult. But the stuff involving Cylo still didn't feel to me like it fit.

That being said, the action was good, the dialogue was good, and the ending cliffhanger at least looked entertaining.

Last of the small batch of comics I bought in the US (at Newbury Comics, Braintree MA) in November during my short trip home. 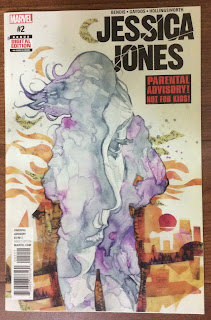 Luke Cage confronts Jessica over the whereabouts of their child, and Jessica tries to find a safe place to rest after the case she's working on falls apart around her.

There was a lot to like in this story. The conflict between Luke and Jessica is great because there is no clear objective right or wrong, just two parents who love their child and are trying to protect that child as best they know how.

I also love the appearances of superheroes in the background, keeping the story gritty and street-level while constantly reminding the reader that Jessica Jones resides in Marvel's New York City, which super-powered beings are part of the background of everyday life.

There were some intriguing plot twists and good pacing as the story moved along. A flashback added some depth to the relationship between Luke Cage and Jessica Jones without overstaying its welcome. Ending was a solid cliffhanger.

Posted by RickSilvaWriting at 12:32 AM No comments:

Brought home from our school library by the Kiddo. 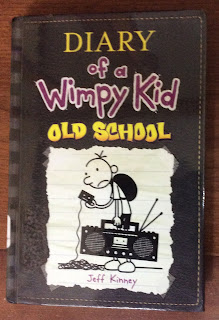 Jeff Kinney tackles the generation gap in the 10th installment in this series.

My son (age 8) brought this home from the school library. We'd read the first book, but are (for the moment, anyway) skipping the eight volumes in between. This wasn't a problem as this book was pretty self-contained.

The theme is the differences between generations, and it's manifested in a number of ways throughout the story. Middle schooler Greg Heffley has to deal with his mom wanting him (and the entire town) to take a break from electronic devices to connect with people the way her generation did. But at the same time, Greg's parents find themselves under the scrutiny of their own generation gap, as Greg's grandfather comes to live with them after the rent on his apartment is raised.

It all culminates in a week-long school field trip to "Hardscrabble Farm", a camp where the kids have to live without modern conveniences.

This was more enjoyable than the first book. The jokes were funnier, the situations more ridiculous and more creative, and the plot was more focused. Organizing the story around a central theme helped. I also thought that Greg was a lot more sympathetic in this story than in the first book. He legitimately tries to do the right thing much of the time, and he seems to learn a bit more along the way. The illustrations are fun, and do a nice job of enhancing the story.

There isn't really any new ground covered in terms of the generation gap issues, and there is still a lack of any decent female characters other than Greg's mother, but overall, I felt like this was a bit of a step up from the first book.

Fourth comic out of five somewhat random recent releases that I got at Newbury Comics in Braintree MA during my short trip back to the US recently. 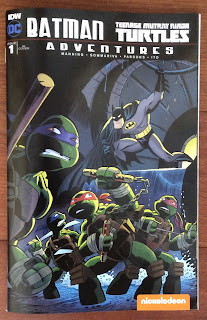 
This is the "Incentive Cover" variant.


All-ages (animated series versions, basically) crossover featuring Batman and TMNT. The problem with these crossovers is the amount of setup involved in introducing the characters to each others worlds (and to each other). This comic suffers from that problem a bit, but at least makes a concerted effort to tackle it in an efficient way.


The story builds a bit slowly. The Turtles and the Batman do not actually meet face-to-face in this issue.

The basic scenario has a bunch of the Batman rogues gallery dumped into the Tuirtles' version of New York by way of an alien portal. Batman has an encounter with Two-Face that gives him his first clue that something is amiss. Meanwhile, the Turtles, who are familiar with the portal technology, battle Clayface in the New York sewers.


There's an attempt a a "shocking" ending bit, although it somewhat fails because it's actually badly out of character for the villains involved.

There was nothing really awful about this story so far, but not much to get excited about either.

Posted by RickSilvaWriting at 11:33 AM No comments:

Third in the stack of five recent comics I bought on my brief trip back to the US. These were purchased at Newbury Comics' Braintree MA location. 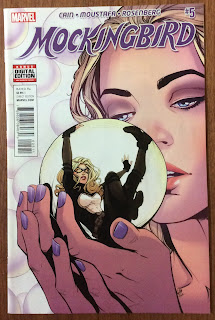 I'd heard good things about the Mockingbird series and issue #5 happened to be the one in stock at the store I visited.

The basic idea here is that SHIELD agent Bobbi Morse is has been infected with a virus that gives her superpowers. Well, really it's the virus itself has superpowers and it lets her use them.

The virus also reanimates corpses into zombies, which is a problem because Agent Morse is in the SHIELD medical facility, which happens to have a good supply of donated-to-science bodies.

Also, Spider-Man (Miles Morales, I think) and Howard the Duck. No, really.

This was very witty. Good joke density too. It was absolutely loaded with snark, and the creative team didn't let the plot get in the way of opportunities for more snark. Seriously, there was an entire page devoted to Bobby going off on an illustrated tangential rant about bad ideas in history.

This was pretty entertaining, even if it was mostly a throwaway story up until a final plot twist that seemed like it was going to shape the direction of the story moving forward.

Did I mention there is a page of paper dolls that includes a severed zombie head?

Funny stuff. I enjoyed this.