I hadn't remembered this one, but according to the signature inside, I got it at Anime Boston 2008. It's sat in the unread comics pile since then, only to be taken out and read eight years later and halfway around the planet! 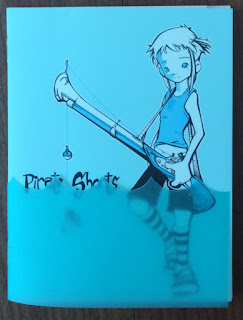 The artwork is lovely, and the book features a fold-out section to allow for a different panel format for a boat-race take on the fable of the tortoise and hare.

There's also a quick Star Wars parody strip, as well as a battle between a crow's nest lookout and some birds.

I found the jokes to be a bit of a mixed bag for my own sense of humor, but the art style is delightful, and I love the little touches on the design elements of the book.

Posted by RickSilvaWriting at 11:15 AM No comments:

This is the last of the small stack of DC Rebirth tie-ins that I picked up over the summer. Like most of these, this one came from one of the Newbury Comics locations that I visited. 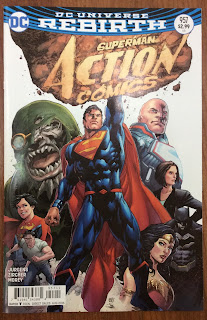 As I mentioned in my review of Detective Comics #934, I love the fact that DC has restored the original numbering to these two long-running series. Looking forward to checking out Action Comics #1000 somewhere down the road!

In the meantime, though, this issue is something of a soft reboot for Superman. The original Superman is missing, possible dead (well, "Dead in the DC Universe", anyway). With Metropolis missing its greatest hero, Lex Luthor has stepped in, with what basically looks like his version of John Henry Irons' Steel suit, complete with Superman chest-shield symbol and cape.

This does not sit well with one Clark Kent, currently moving into a home in upstate New York (Maryland? Anyway, it was upstate somewhere) with his wife and newly-super-powered son. This, apparently, is a Superman from one of the (52? Is that still a thing?) alternate Earths in the multiverse.

He confronts Luthor with predictable results, but if Superman is battling Luthor, then who is the Clark Kent who just showed up to cover the story for the Planet?

In spite of all the multi-universe nonsense going on, this was a really well-paced story that was told in a nicely straightforward and logical way. Even with it being something of a weird situation in terms of continuity, this issue succeeds both as a jumping-on point for new readers, and as a fun entertaining read.

As a side note, nice to see Maggie Sawyer back in action.

Also, excellent cliffhanger ending with a least a reasonable attempt at a logical buildup.

Here's one of those oddball items that makes its way into the unread comic stack from time to time. This is really a zine, not a comic. It's a Columbus OH area zine covering tabletop gaming and general geekery from 2008. I am guessing I picked this up at one of the Columbus conventions that I've attended, either SPACE or Origins. It could also have possibly come from a comic or gaming shop in that area, as I have visited a few of those when in town for conventions. 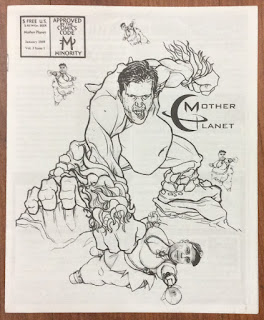 Columbus OH area gaming and generally fannish zine from 2008. Some of the material is specific to the time of publication, including event listing for local game and comic stores, particularly for Warhammer 40K.

There are a couple of non-system specific articles on tabletop roleplaying, one covering magic spell selection, and one covering thieves in fantasy games. There is also a short comic strip by Rex Hall and Bill Stinemetz, as well as a comic review by Timothy Razler. The credits don't always make it entirely clear who worked on what.

The best thing here is the first part of a science fiction/horror prose serial called The Paddirn Principle. It starts off as a fairly generic dystopian piece, but then adds a really fun twist involving a haunted spacecraft. It was a fun read, by the end.

The two rpg pieces were fairly straightforward, and the comic strip was a simple slapstick joke, but this still looked like it was a nice contribution to the local gaming scene at the time. Having been involved in a zine a lot like this one at one point, it brought back a bit of nostalgia for me, as dated as it was. 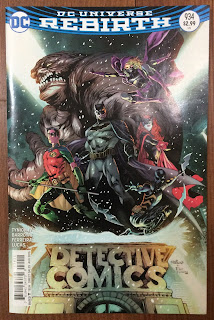 Another of the new comic purchases I made over the summer. This one came from one of the Newbury Comics locations I visited.

First of all, I'm happy to see Detective Comics restored to its original numbering! When the New 52 started, one of the little things that I was most disappointed with was the renumbering of the "legacy" books, Action and Detective, to new #1's. I was cool with all the other titles, but these two have had their consistent numbering through all of my comic-reading, and way back to the beginning of DC. So I'm not surprised, but I am pleased to see the original numbering restored.

As for the story, well, Detective has been a lot of things in over 900 issues. With Rebirth, Detective is becoming a team book. The Batman and Batwoman are leading and training a team consisting of basically two Robins and a Batgirl (Tim Drake, Stephanie Brown, and Cassandra Cain), plus Clayface, for no real reason that makes any sense to me.

They're up against a new threat/conspiracy that seems to be closely tied to the Batman, and is operating with powerful technology and a seemingly omnipresent reach in Gotham. So, basically the Society of Owls, but not. The Batman's reaction to this new threat felt horribly out of character, but it was really all just an excuse to put the team together, and its the interactions within that team that will make this an interesting story (or not).

So far, it was entertaining, even if one needs to swallow the urge to apply logic. Clayface is fun, even it his presence in the group is ridiculous. Cassandra Cain, who calls herself Orphan these days, continues to be annoying as a character, and the interaction between Tim and Stephanie slipped too easily into stereotypical gender roles. Kate and Bruce were a lot better in that regard, although the ending interaction of "there's something you're not telling us..." felt like a tired cliche. For the love of Pete, just go ahead and tell them, Bruce! That holding back information stuff never ends well.

The book has a nice look, although the opening fight scene felt clunky due to limitations in showing much detail on the (Batman-imitating) villain.

This had a lot of weaknesses, but still had an overall sense of momentum and potential.

Picked this issue up at Comics for Collectors in Ithaca NY USA during our 2016 Father/Son Road Trip. 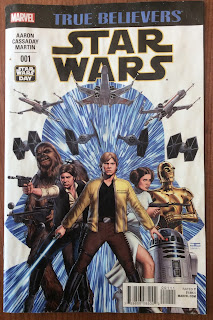 This takes place between A New Hope and The Empire Strikes Back, with the regular crew of heroes attempting to infiltrate and take out an Imperial weapons factory.

Having read a lot of Star Wars comics, with many of them just feeling a bit "off", this was a pleasant surprise. Artist John Cassaday did a great job with the look of the characters, and writer Jason Aaron just nailed the character interactions and the overall flavor.

Cassaday also had some great-looking work on the action scenes, particularly on Chewbacca leaping to escape a collapsing platform and Leia punching out an Imperial officer.

A confrontation between Luke and Vader feels like a bit of a tease given the restrictions of continuity, but if you can put that aside, this is a really fun bit of space adventure that fits the Star Wars universe perfectly.